The Brushy Creek property features 53 rolling green acres divided into 5 pastures anchored by the Brushy Creek.  With roots tracing back to 1865, this plot of land was owned by a single family since World War II.  Over the years it was used for row cropping, hay production, and raising cattle.  In 2016 it was purchased by Derick and Claudia Schaefer with the intent of raising Texas Longhorn cattle and a small orchard of East Texas blueberries, peaches, and fig trees.  Its official address is in the unincorporated  town of Scroggins, TX (population 127).

The Grün Ranch Brushy Creek features five pastures separated by the Brushy Creek and a significant hill on the west side of the property.  Featuring two soil types, the land is plush with Bahia, Bermuda, Switch Grass, and trees.  We have names for some of them:  Mika’s Grazing, Omi’s Stomping Grounds, Grün Hill, and The Bahia Fairway.  The ranch soil consists of about 30% sandy loam and about 70% loam silty clay.  We maintain yearly soil and forage testing records.  Our goal is to maintain the land in a way that produces the best source of nourishment for our cattle.

The Brushy Creek is a significant Northeast Texas creek providing water for  Lake Bob Sandlin.  We’ve created entrances to the Brushy creek in a way that it is accessible from 4 of our 5 pastures allowing us the ultimate in flexibility in our rotational grazing efforts.  We are quite pleased with the way all of this design turned out.

Though having a year round source of water is a blessing for any cattle rancher, it creates a set of challenges and responsibilities.  During heavy rainfall the Brushy Creek will backup at the lake and eventually come to a standstill flooding a portion of our back 20 acres for up to days on end.  Though hay or crops have always been grown on this back acreage, we decided that we wanted to formerly create a conservation plan for this pasture.  Our investments in planting Switch Grass have flourished in these pastures.

On the far east side of the property the Briary Creek boarders the property.  This small creek is a fraction of the size of the Brushy Creek and we currently do not incorporate it in any of our pastures.

When we put a contract on the ranch the grasses were significantly overgrown and there were parts of the land we simply couldn’t couldn’t walk.  We knew there would be some surprises.  One of those pleasant surprises was a small spring fed pond in the center of the property.  Another was a medium depth well that provides access to the same water source that supplies the pond.

Though the creeks and the spring fed pond provide us plenty of water, we knew we needed a large, centralized pond for our operation.  We worked with the NRCS on the site selection and design of this pond.  In 2017 we brought the bulldozers in and excavated it.  With normal East Texas winter and spring rainfall, we should be full by the time the grasses green up.

The Railroad & Its History

The Grün Ranch sits in the epicenter the former Louisiana & Arkansas Railway’s extension to Dallas, TX.  In 1976 the railroad forfeited its right of way which held a old and covered set of tracks on the the Southern most border of the land.  Our southern most fence line sits on top the gravel that once supported this track.  The deeper you follow this line the more interesting it gets as there are two former bridges crossing the Briary Creek as well as evidence of a derailment.  We are currently researching the potential derailment in the archives of the Franklin County Genealogical Society.  On rainy days when we can’t do much at the ranch, it is fun to go sift through microfiche archives of the Mount Vernon Optic Herald.

The railroad ran its new modern track about 500 yards to the south of this original easement.  Though we can’t see the track from the ranch, you can certainly hear a train when it comes by.  The schedules feature 1 to 6 short trains daily that fill the air with a low, peaceful rumbling sound of a train traveling at low to medium speeds. 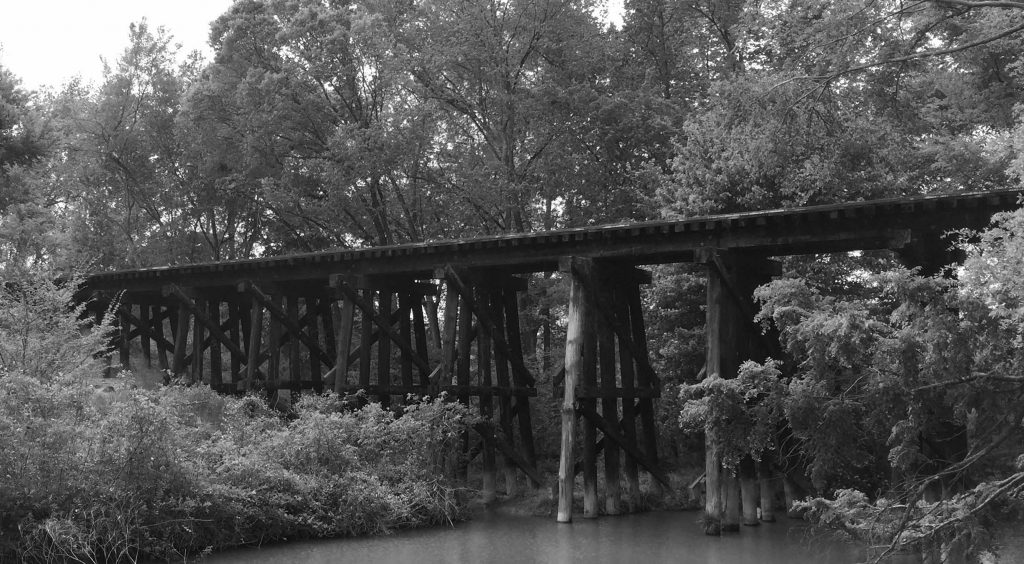 The western boarder of the property contains another defunct portion of the Tidewater Oil Railroad.  Though now owned by Kansas City Southern Railway, it is not an active line.  It does feature a beautiful throw back wooden railroad bridge (above) that towers three stories above the Brushy Creek’s entrance to the ranch.  Visible from two pastures, this is one of the most peaceful and serene areas of the land.